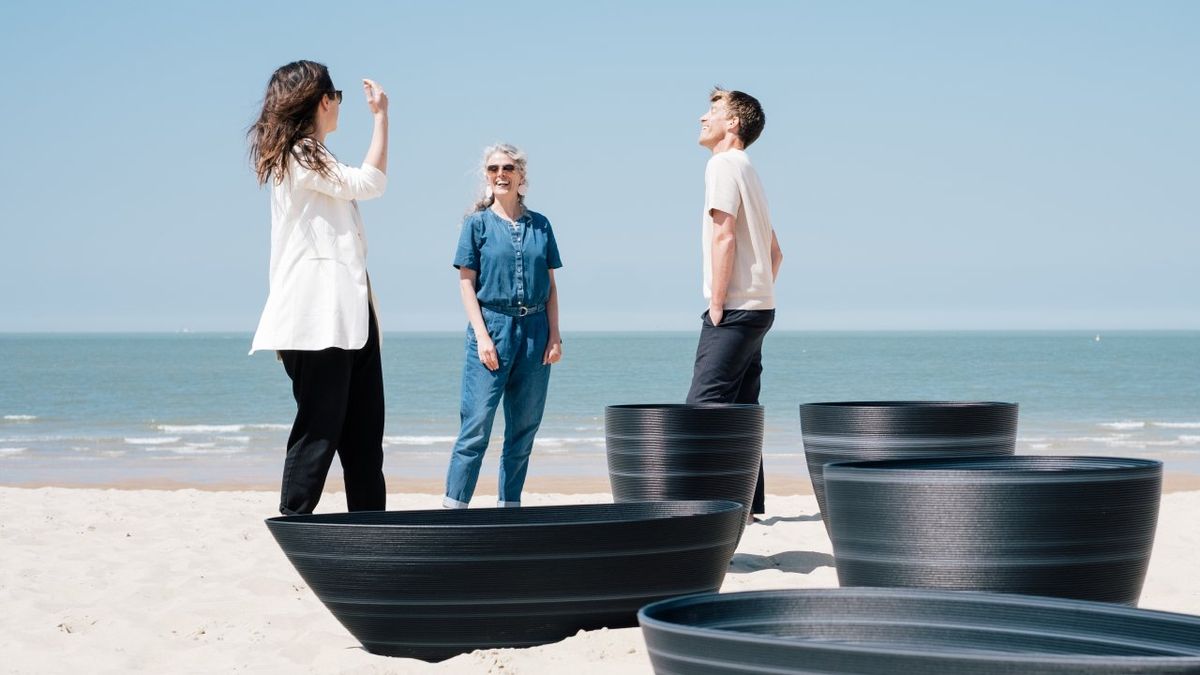 Dutch architecture firm House of DUS and Aectual were invited by Belgian magazine Sabato to create a unique limited-edition product, as part of their yearly ‘Knokke’ series. Every year Sabato invites an international design team to produce a unique item made from materials locally found in the Belgian coastal town. This summer it is a set of two architectural planters, 3D-printed from plastic from the high tide line in Knokke.

The design of the large-scale planters was inspired by the natural shape of mussels, and the planters are suitable for indoor and especially outdoor use. They are made from 100% recycled waste plastic, and just like real shells, each have their unique patina. More so, mussels print their shells in a layered manner, just like Aectual’s 3D printing technology. The natural shapes of the large planters are perfectly dimensioned for terraces and balconies, to bring the natural beach feeling back home.

The planters are produced on-demand in a limited edition. Each planter is numbered, color graded by hand, and bears a unique signature.

For sale exclusively via www.Sabatoshop.be until sept 30th and after that available in the Aectual.com collection, with a maximum of 500 planters.

Read the entire article from Sabato Magazine below:

It has become tradition: a designer who makes a unique object especially for Sabato's Knokke edition. After glasses of Knok’s sand, a terrazzo bowl with shells and a stool made of excavated building soil, we now present 3D-printed planters made of plastic from the sea. A big thank you to the Amsterdam print platform Aectual. “We are the Tesla of the construction industry.”

Tuesday June 8th. World Ocean Day. Meeting at the beach of Knokke with the entire Sabato team. We are here to collect plastic waste that the 3D printing company Aectual will use to create unique Sabato planters. Armed with sturdy bags we roam the high tide line full of expectation.

We think we will score kilos of plastic in no time. But apart from some abandoned soda bottles, washed up caps, pieces of fishing net and a broken children's shovel, we find very little. The Knokke beach is remarkably clean. Maybe the special beach sweeper has already passed this morning? During a clean-up campaign during the Easter holidays, some hundred volunteers collected 120 kilograms of waste here. Not bad, especially if you know that most plastic is in the sea and not on the beach.

Anyway, our point has been made: with the beach season just around the corner, Sabato wants to draw attention once again to the problem of ocean plastic. This is necessary, you cannot solve the plastic pandemic with a vaccination campaign. We have to change our behavior. Every Belgian person threw away more than 30 kilograms of plastic in 2020. Only half of it was recycled. Part of the other half probably ended up in the sea that ended up in fish via microplastics, and on our plates and in our bodies.

The Aectual team is also present to roam the beach. “This project is close to my heart. I was born and raised in the dunes of Texel, in the house of my grandfather who was a dune farmer. As a child I took everything I encountered with me on beach walks. That's what I'm teaching my kids now. Based on the idea: you leave the beach cleaner than how you found it," says Martine de Wit, one of the three founders of Aectual. ‘Usually we mainly find plastic. Logical, because that's not perishing. That's part of the problem. But also the solution. It is durable enough to be used outdoors, for example. And you can reuse it several times.’

That's exactly what they do at Aectual. They make design and architecture from plastic waste and bioplastics. “We have to get rid of the negative idea that plastic is a disposable product. It is also a raw material with which you can make beautiful things, with the new craft of 3D printing', suggests Hans Vermeulen of Aectual.

The Amsterdam studio designed these planters especially for Sabato. ‘The shape refers to the mussel shell. Because scientific research shows that mussels contain an enormous amount of microplastic particles. But also because a shell is actually 3D printed, but by nature. If you look closely, you can see that it has been built up layer by layer.' Aectual made two planters: a low oval and a high round one. They are printed from local waste plastic: a mix of beach plastic found from Knokke and Belgian Household PP waste. "That's why the planter is black. If you mix all the waste, that's the color that remains," explains Hedwig Heinsman, the third founder of Aectual.

‘We mix white pigment in by hand, creating subtle lines that are reminiscent of the mussel shell.’ Because each planter is individually printed – and not cast in a mold – each specimen looks slightly different. One planter contains the equivalent of about 120 plastic shampoo bottles.

3D printing is hot. Due to the hype, many companies were drawn to this new industry. If not Actual. This trio is the superlative of early adopters. In 2013, they already made the world press with their 21st-century version of an Amsterdam canal house that they wanted to 3D print with a homemade printer the size of a sea container. Even Barack Obama came to see it.

Aectual distinguishes itself from other print companies by its pioneering position and tons of experience, and by its scale. The four self-developed extra-large printers have robotic arms that can print a surface of 170 m² with high quality. “Our design approach is also essential. In other words: we are not print nerds', laughs Heinsman. “All three of us are architects and we know how a design process works, so we can better guide other architects and designers who want to start 3D printing.” Aectual offers a library of architectural basic elements that meet all strict building standards.

With those basic shapes of stairs, columns, walls, ceilings, floors and facades, designers can then do their own thing. And, for example, also integrate additional functionalities. For example, Aectual recently printed a facade in which a drainpipe and sun canopy were incorporated. Entirely new things become possible. Heinsman: 'In the construction and interior world, 50 percent is custom work. With 3D printing, this is faster, cheaper and more efficient. Moreover, as a designer you have more freedom. I sometimes say: we give designers superpowers.'

According to their business cards, Vermeulen is CEO, Heinsman creative director and De Wit architectural product developer, but the collaboration is more like a three-stage rocket. ‘One has an idea, the other works on it and the third ensures that it is actually made,’ explains Heinsman. “That last step is very important for us. We are real makers.”

They were already that way when they got to know each other as students at Delft University of Technology. For a group work they made a large structure from woven inner bicycle tires in six weeks. In 2003 they founded the architectural firm DUS, which does projects on every scale: from objects to public buildings and urban planning. They put themselves in the spotlight with experimental projects, such as a soap bubble pavilion, a Buckminster Fuller domed pop-up bar with umbrellas, and of course the 3D-printed house.

That canal house indirectly gave the starting signal for Aectual, says Heinsman: 'After that, we received many questions from other architects who wanted to 3D print, but they preferred not to work with another architectural firm. So in 2017 we founded Aectual as an independent platform for designers. Since then, the applications have been pouring in.' And not the least of them. They made a special cast floor for Patricia Urquiola in which a unique pattern is incorporated, which can be seen in the BMW museum.

Zaha Hadid also ordered such a unique patterned floor and Nike knocked on the door for a special wall for their London flagship. Currently on their customer list: the fashion label Burberry, Disney and the Belgian Maker architects. Vermeulen: 'The fact that those big names found us so quickly is thanks to DUS. That's where our network comes from.”

The architectural firm is currently on the back burner. Aectual takes up all their time. Because it's going fast. The start-up is now a scale-up with customers as far as America and the Middle East. Their thirteen-person team will soon be significantly expanded and to absorb the growing pains, they have external investors from the Netherlands and America. They are doing everything they can to become a global player.

Initially, Aectual only worked B2B. But in January they launched a webshop where anyone can buy their designs. Currently about seven products, such as a bookcase and a room divider, almost all designed by DUS Architects. The collection will soon be expanded with furniture from their customers. So very renowned designer names. ‘We offer the furniture in standard sizes. But they are printed especially for you, so you can also make the bookcase a little higher or the sofa a little longer, so that it is perfectly tailored. That is one of the great advantages of 3D printing', praises Heinsman.

‘Together with the sustainability aspect, of course. It is a production process without waste. You only use what you need. Moreover, you can reuse certain plastics several times. If you're tired of furniture, you can shred it and print something new. As a research, we have already chopped up and reprinted a piece of furniture seven times, with hardly any loss of quality.'

That way, plastic from dirty polluters can become a sustainable circular material, which rises from its ashes time and again like a phoenix. To encourage people to actually reuse discarded furniture, walls or floors, Aectual works with a deposit. “And we want to go one step further and evolve towards a rental model,” says De Wit.

Another future dream of Aectual is local production. They currently print everything in their own print factory in Amsterdam. Vermeulen: 'In five years' time, we expect to be able to simply send the 3D file via the cloud, after which the cabinet or wall panel will be printed in America, Dubai or London. We also offer a digital library of existing designs on which designers can work further. As an open sharing space, Aectual becomes the Spotify of architecture.”

All these ambitions fit in with Aectual's big dream: making customization accessible to the masses. Is that ambition achievable? This planter of 495 euros is difficult to call competitive. ‘Now, 3D-printed objects are indeed still relatively expensive, but that will change. We are like Tesla. They first brought a very expensive racing car on the market. Each subsequent car was a little cheaper. This will also be the case with 3D printing', says Heinsman. Vermeulen nods: 'In this way we want to help make the highly polluting construction world cleaner. And the world a little bit more beautiful. It all starts on a small scale, with this planter.”

It has now become a tradition: a designer who makes a unique object especially for Sabato's Knokke number. After glasses of Knok's sand or a terrazzo bowl with shells, Sabato will present a planter this summer, 3D-printed from plastic from the high tide line in Knokke. The architectural object was designed by the Amsterdam House of DUS in collaboration with Aectual, which has also collaborated with top names such as Patricia Urquiola and Zaha Hadid Architects. Each planter is uniquely printed and has a serial number. But above all: every object is sustainable, zero-waste and contributes to cleaner oceans.

Order your Sabato Knokke planter directly at sabatoshop.be until 30 sept 2021. 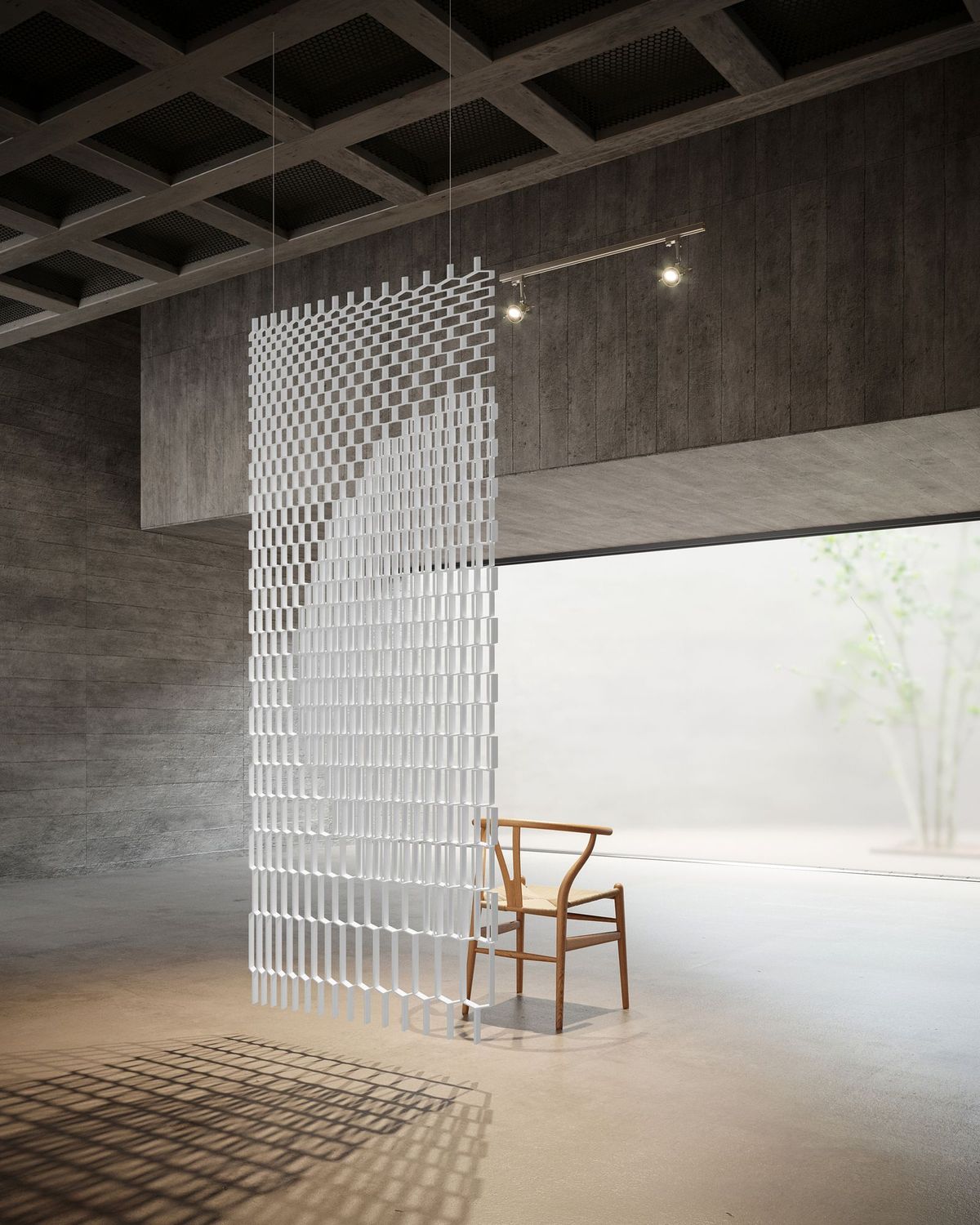 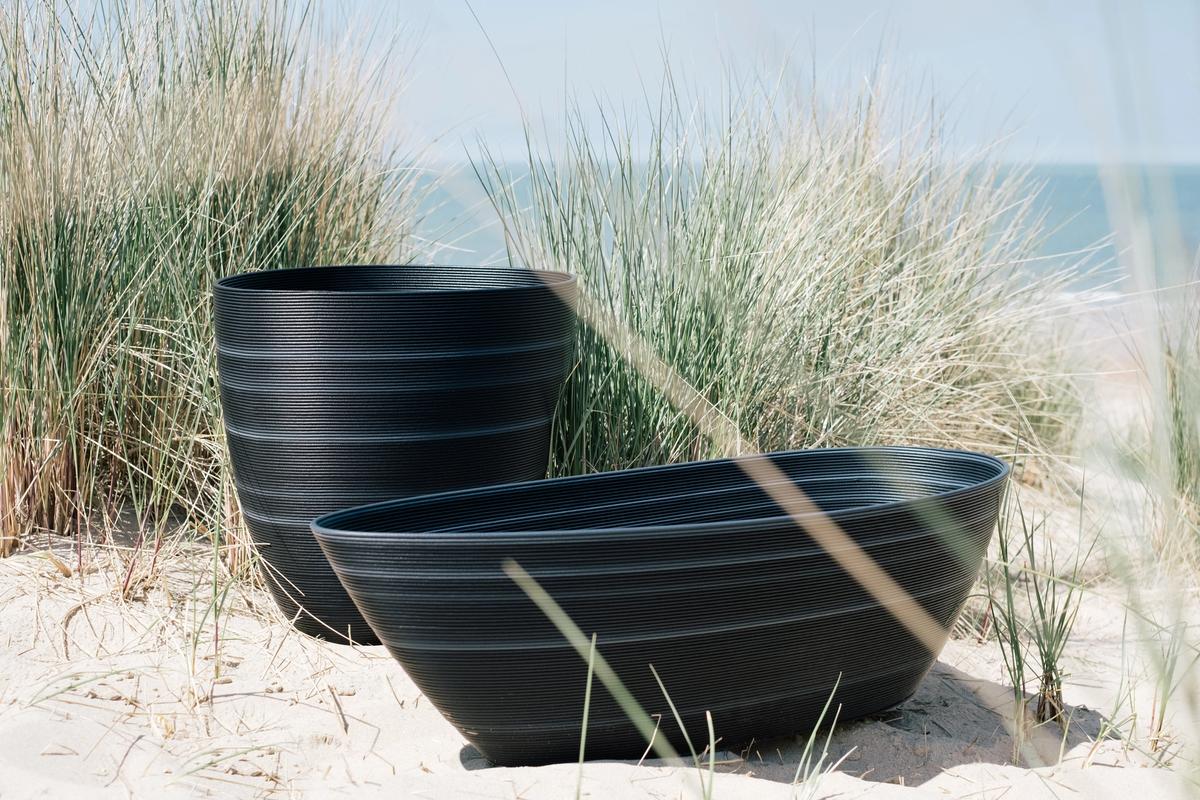 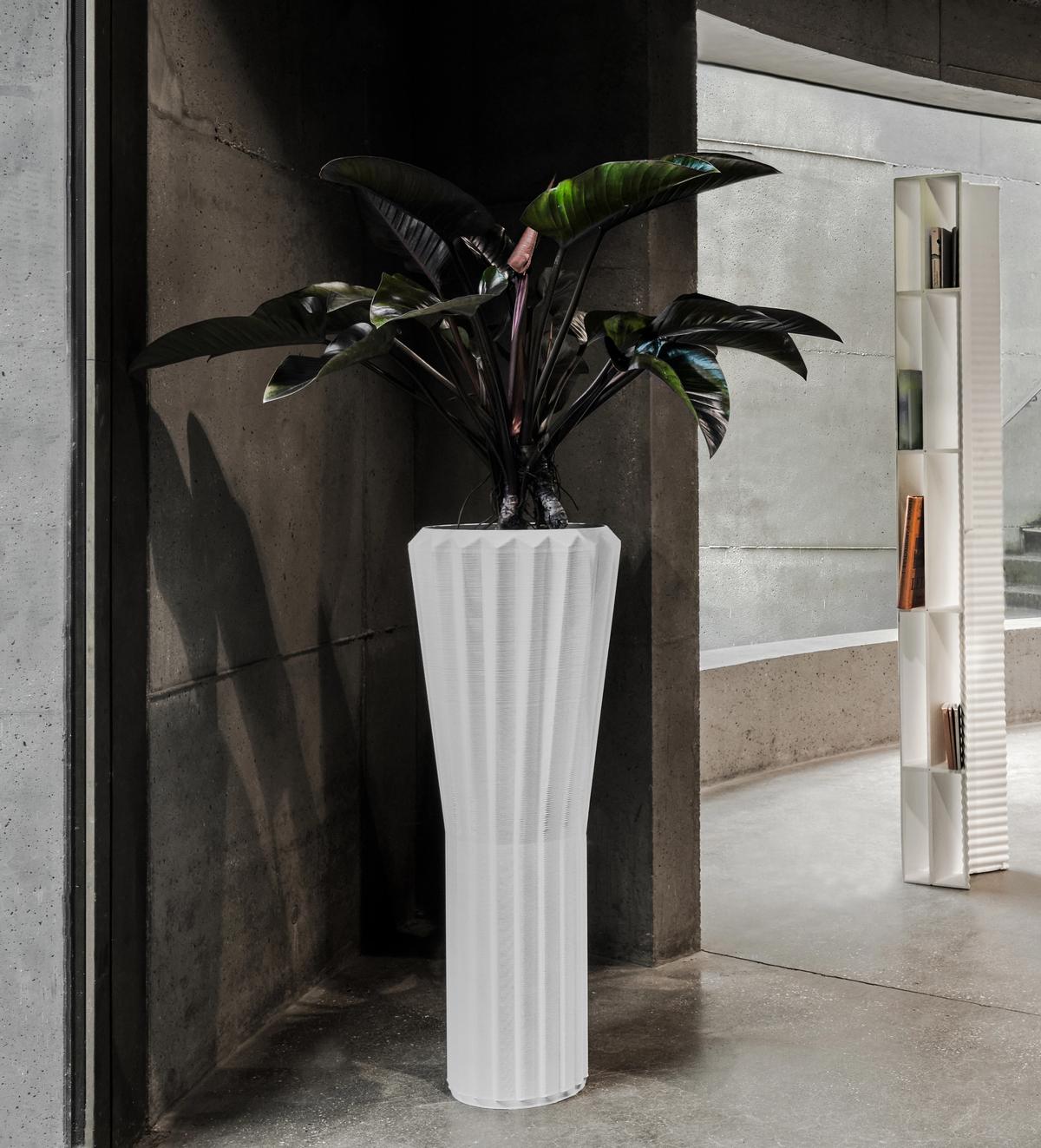